We arrived at BCH (Bristol children’s hospital), ward 31, just after 12 noon with all our paraphernalia. We were met by the lovely Andrea, who just happens to be the mum of an old school friend, and she showed us to Edith’s bed. We had our own room, which with a child like Edith is an absolute god send! Edith is easily disturbed when sleeping so our own room meant it would be easier for her to rest after the operation and it also meant we could spread out and have room for her specialist chair. We settled in and waited for the anaesthetist and surgeon to visit. The surgeon explained the procedure to us again. They would feed a small camera with a bright light on, down Edith’s throat into her stomach. When they could see the light shining through in the right position they would use this as a marker to make a hole for the tube. The whole procedure would only take between 10-20 minutes. They made us aware of the potential complications, as with any surgery, but they were all very low risk. After she had left the nurse arrived to do some observations and check Edith’s glucose levels (Edith had a previous issue when she was starved for to long and her glucose levels dropped very low), these were all satisfactory. She explained that there were three children on the list and Edith would be the third to go down as the others were only babies and that she would keep a very close eye on her levels. Edith was quite sleepy now as she hadn’t eaten since 6:30 am and was feeling quite weak. A few hours later a nurse appeared with a hospital gown and asked us to get Edith ready to go down.

Shortly after we got her ready, it was time. As I followed her bed down to theatre it dawned on me that this was not the lengthiest procedure she had ever had, but it was the biggest. It would change her life; our lives, for the foreseeable future. I held her hand and reassured her as she was put to sleep, she struggled which was absolutely heartbreaking but all I could do was tell her that everything was gonna be alright; I left that room and fell apart. I had held Edith’s hand through a few anaesthetics before this one, yet this one seemed so much harder and so different. When I had cancer I had three general anaesthetics in total and even though I had never had one before, the first two seemed pretty underwhelming. The third was my hysterectomy, the life changer and I literally sobbed to a perfect stranger as they put me to sleep. This is all I can relate the overwhelming feeling too, my precious baby would be different somehow. The nurse threw her arms round me as I was crying so hard, I actually snorted (I know right!!). We made our way back to the ward. The nurse said that Edith would be a couple of hours so Dan and I went to get a coffee and some food.

We arrived back to the room and had only been there 10 minutes when the nurse came in to say that Edith was ready to be collected from recovery. She said the operation had all gone well and was very straight forward. As I approached the recovery bed Edith looked at me and gave a little smile. I stroked her hair and kissed her forehead, it was so good to see her little face; all of it (no nasty tube). She made a few groans as we made our way back to the ward but mostly after that she just slept. Before the operation the surgeon had said that Edith wouldn’t be able to have any milk until the next morning which at the time we felt as though it would be a nightmare, but looking at her now it was clear she would be mostly asleep anyway. 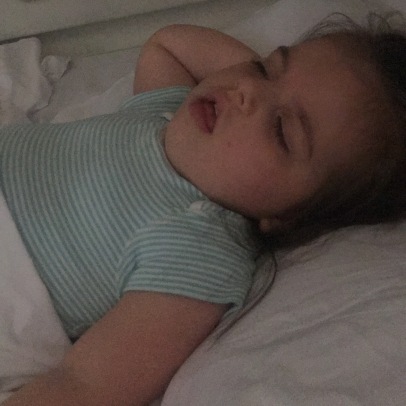 It was a long night. As Edith was asleep for most of the afternoon she woke up at 1am and decided that was wake up time, although as she was still weak from the anaesthetic she was happy just looking at her toys and wasn’t upset or in any discomfort at all which was great. The nurses had hooked her up to a drip so she was able to have a slow intake of vital fluids, painkillers and her vital medication overnight, and I think this was keeping her hunger at bay.

The next morning the doctors did their rounds and instructed us to start to feed Edith again, but just to build up her volume of feed gradually. We did as we were instructed and it was all going really well. Dan insisted I went home for a few hours as I hadn’t really slept and Edith seemed fine so I decided this was a good idea. Whilst at home I had a phone call from Dan to say that she had been quite sick with her afternoon feed, he assured me she was ok and that the nurse had said it was quite common in these circumstances. I made my way back to the hospital in time for the next visit from the doctors. We had naively hoped that we would be able to take Edith home that evening but as her surgery was so late on the Tuesday, they said that they felt it was best Edith stay in another night. Her feed that evening went well and we both got a good nights sleep. Edith was much brighter the next day and even managed a little giggle.

Over the course of our stay we took it in turns to feed Edith and gradually built up her feed volume. Feeding through the PEG was much the same as the NG tube except we didn’t have to check the PH level as we knew the tube was directly into the stomach. By the Thursday morning we felt totally comfortable with the procedure and had been signed off by the nurse. All our community support and milk was already in place because of the NG tube, so it was going to be a much more straight forward discharge this time.

The surgeon visited us first thing Thursday morning and was more than happy with Edith’s progress. Edith was sat up in her chair when she arrived and after a quick check of the site we were free!!

We had so much left to do in preparation for our holiday on Saturday and obviously getting Edith strong was my main priority. She was still very weak and slept lots at home on Thursday and Friday….

She wouldn’t normally fall asleep on the sofa, only when she is poorly. This is the only time I can steal a cheeky snuggle. Bless her, she was exhausted.

The nurse came to see us on the Friday at home and advised that the PEG would need to be advanced (into the stomach) and rotated after 4 weeks and then weekly from then on. She explained that although we must wait 4 weeks for advance and rotate we must still move it on the surface daily and obviously keep the site clean. This was (still is) a bit of an issue for me seeing as I can’t look directly at it!! Every time I have to clean it, I have to take a deep breath. I know I will get used to it, I just can’t get my head around the fact that its just a hole..

The 4 week marker came and the nurse came out to show us (mostly Dan) how to advance and rotate the PEG. This involved opening the white clip you can see in the picture above and pushing the tube 2-3 cm into the stomach, rotating it all the way round and pulling it back against the stomach wall and fastening the clip back down. The reason you have to do this is because the stomach wall would naturally grow over the anchor holding the PEG in, and eventually block the tube. This is to be done on a weekly basis. Edith is absolutely fascinated by it and we have had a few hairy moments were she has managed to tug it quite hard. Apparently it’s quite difficult to pull out, but it does happen. If it does happen, obviously it would just be a hole in the stomach!! The hole can close in as little as 20 minutes so we have to make our way to A&E straight away. If this happens, I hope i’m not alone!!!

Edith is doing brilliantly since the PEG and we are all slowly getting used to this new way of life. Most of Edith’s friends are fed the same way and it’s a click we are proud to be part of 🙂